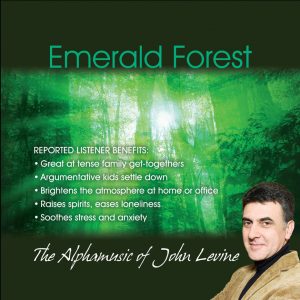 Emerald Forest is designed to produce a calm, relaxed alpha state. It is ideal background music for events and gatherings. Emerald Forest reflects the crisp, still, timeless atmosphere of ancient trees in sunlight. This is a safe and easy entry point to Alphamusic for highly anxious and stressed people with hectic schedules.
Through this music I want to help us become our better selves. The title of each track reflects the emotional aspirations I want to inspire to: Gratitude, Harmony, Awakening, Serenity, Love and Divinity. Imagine if all of us could hold these feelings at the same time even for one day.
John Levine

Download/mp3 version - 30 minutes
MP3 downloads cannot be refunded or replaced once purchased. Your download will be automatically sent to the email provided. Link is active 2 days and has limited access.
£11.99

John Levine has vast experience as a composer and as a teacher of meditation. He believes that music has a powerful effect on the brain and can be designed to induce specific positive changes in mood and behaviour.

Emerald Forest was featured at three major concerts:
* CONCERT FOR DIANA
* HYDE PARK CALLING
* LIVE EARTH
More than 60,000 people at Concert for Diana, 65,000 at Live Earth and about 40,000 at Hyde Park Calling had a chance to listen to the soothing music of Australian composer John Levine.

Peter Barnard, proprietor of Sigma, has introduced Mr. Levine’s music to the Britannia Row, a professional sound rental company that supply many concerts and festivals around the world. Britannia Row was a contactor for Concert for Diana, Live Earth and Hyde Park Calling. They were delighted to play John’s Emerald Forest during the band change over period at these three major concerts. I was actually present at Hyde Park Calling and Live Earth and heard Emerald Forest John’s magical and calming music being played over the Tannoys. About 100,000 people at both concerts had a chance to listen to Emerald Forest said Peter. After being there the entire day since early morning till very late at night, the sound engineers felt that John’s Alphamusic was perfectly matched to help keep the audience happy and peaceful that they played Emerald Forest on numerous occasions.
Peter Barnard, loud speakers system seller

I found that it helped me to slow down far more quickly. It enabled me to relax, calm my inner anger and begin to see things from a new perspective. You can’t make intelligent decisions when you are angry. Whenever I listen to John’s music I physically feel rejuvenated, emotionally relaxed and calmed. Emerald Forest is a lively composition, more in tune with my energetic, enthusiastic approach to business sales and life in general, yet at the same time calming and relaxing. Listening to music is a lot easier and more convenient, because it can be done anywhere and anytime you choose. It is more immediate. After a quarrel I could go straight to my home–office and turn on the music. I didn’t need to absent myself from the family home.Alphamusic helped me to calm down and consider decisions rather than making hasty ones.
Tim Gale, salesman

I have been playing The Emerald Forest in my kitchen, and a great testimonial, in my eyes, is that neither my 25 years old son nor husband have said what’s the rubbish is playing? howsoever they usually comment it this way!!! In face they seem not to have noticed at all. So at the very least I can say that they are not irritating CDs!!!
Pat G, mother and wife, family meal times