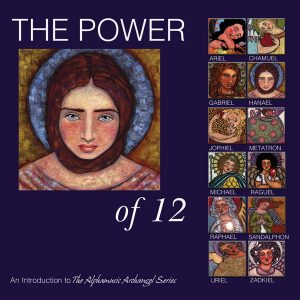 An introduction to The Alphamusic Archangel Series
In association with angel expert, Joylina Goodings
Please note: The Power of 12 MP3 version is downloadable as a zip file. The mp3’s will need to be extracted before playing. Contains 12 tracks.
It is a compilation of 12 Archangels.

MP3 downloads cannot be refunded or replaced once purchased. Your download will be automatically sent to the email provided. Link is active 2 days and has limited access.

An introduction to The Alphamusic Archangel Series

The Archangels are the giants of the angelic realms, splendid beings and particularly powerful emissaries of the Light. Their mission is to join with Heaven and assist throughout the Universe, in particular on Earth. From before the dawn of time they have known the story of the world, and were charged with assisting our planet and its inhabitants to shift into the new dimensions and consciousness. Never more so than now. All Archangels are conduits of peace, forgiveness and grace, and also each has its particular area of expertise. They help us to join in the dance of Heaven on Earth, the dance of love on our planet, and in so doing blaze a trail for others to follow. Their desire is to serve, yet it is the Law that we must first ask for their help and prepare ourselves to be open to receiving it. You may ask for help either by offering a specific request, or else simply by calling their name. And of course, most importantly,we must remember to thank the Archangels when assistance has been given.

For the first part of 2013, I encountered quite a few challenges with my health. My immune system seemed to be totally out of balance and my GP couldn’t give me any answers. I had the vomiting bug three times in quick succession, a nasty kidney infection, tonsillitis, flu and sinusitis and this was all capped off my a constant cold that just wouldn’t go away. When I spoke to John about this, he asked me if I was sleeping well. To which my answer was ‘no’. In fact, I was sleeping very lightly and restlessly. John suggested that perhaps I wasn’t getting enough deep delta sleep – the sleep during which our body does most of its repair work and the immune system is strengthened. John sent the MP3 over via email and when I opened the email, it started playing automatically, so I just left it playing on a very low volume as background music while I was working on some writing and then forgot all about it. I must have only been a few minutes into the music, but I was writing away and suddenly realised my eyes were beginning to get very heavy. I almost felt like I was going into a trance. I realised I still had the music playing and I thought, ‘My god, it really does work!’ It was like a wave of drowsiness was washing over me – almost like I had taken a sleeping pill, but a lovelier and far more comforting feeling. So I took my computer into my bedroom and had a lie down and drifted off into the loveliest, deepest sleep I’d had in age
Alexandra Wenman, the editor of Prediction magazine, a children’s author, Angelic Reiki Master Teacher and alternative health practitioner.

As I relaxed and listened to each of these Archangel CDs I was surprised how clear and strong the message of each Archangel was for individuals and for humanity.
Diana Cooper, World Expert on Angels

Right from the outset, I wasn’t disappointed with John’s music and it started to work almost immediately. My anxiety symptoms including periods of short, rapid breathing began to return to normal. People should be aware that they can find simple, inexpensive solutions to their problems.
Rut Parsons - anxiety