The Alphamusic of John Levine™

Alphamusic™ is music that is founded upon scientific research into brainwave activity. This research examines how music can regulate the alpha waves in the brain, and the resulting effect that this can have on the user. In order to truly understand what Alphamusic™ is and how it can help you, we′ve broken down everything from what brainwaves are and where they originate, to how the music regulates these brainwaves and what this means for the user.

What is an alpha brainwave?

An electroencephalograph (EEG) is a device that registers brainwaves. Brainwaves are produced by neurons sending pulses to one another in the brain, and the combination of millions of neurons communicating at once creates a surge in electrical activity. The EEG tracks this electricity which is then grouped together dependent on the area of the brain, and commonly referred to as a brainwave. So, simply put, a brainwave is electrical activity produced by communicating neurons in a certain area of the brain.
There are five established types of brainwave at present. These are alpha, beta, delta, theta and gamma. Alpha brainwaves originate from the occipital lobe during wakeful relaxation, and are responsible for mental co-ordination, awareness, calmness and the ability to retain information whilst learning. Alpha brainwaves control the quiet of the mind and the light resting state of the brain.

What is the alpha state?

The alpha state is the resulting state that a user finds themselves in upon listening to Alphamusic™. Often described as a relaxed awareness, easing the user into an alpha state decreases the electrical activity in the brain by prioritising the alpha brainwaves. This means that once the listener is in the alpha state, the mind is de-cluttered, able to work more efficiently and able to pick up and retain information more easily. The alpha state is what allows users to feel the benefits of Alphamusic™, whether it′s easing them into a restful nights sleep or creating a calm space for focus and stress relief.

How can Alphamusic help you?

By easing users into the alpha state, hectic electrical activity in the mind is reduced, the mind is cleared and as a result, it is more able to process information, focus and relax. Alphamusic™ can work as an effective natural remedy for a range of different common ailments – to discover exactly how Alphamusic™ can work for you, select the option most suitable for you from the list below:
* Sleep and Insomnia
* Stress and Anxiety
* Concentration and ADHD
* Pain Management
* For Children 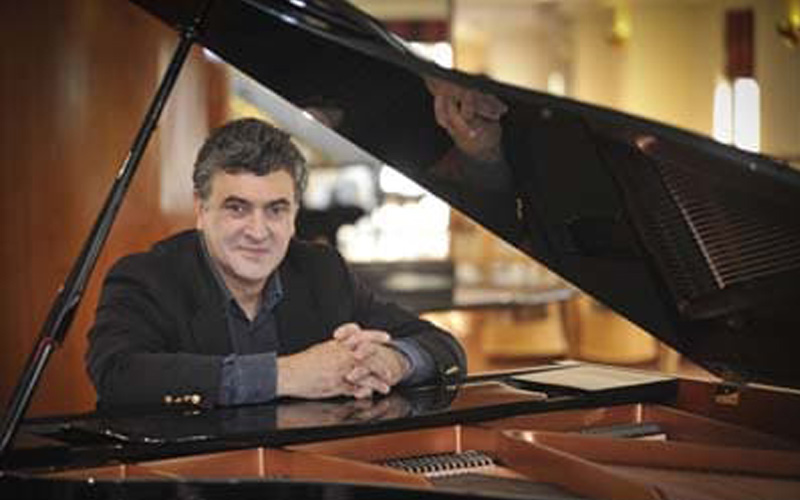 Alphamusic™ is the brainchild of the Australian composer John Levine.

John has a diverse and detailed background in music. He studied classical music academically, graduating from Sydney University with a prestigious Bachelors of Music (Composition) degree. He later went on to win the Pepsi Cola Rock contest at the world famous Sydney Opera House, a monumental achievement that saw him go on to pursue a successful career in commercial music. John worked as a producer for bands such as INXS and Midnight Oil, as well as producing jingles for the likes of Saatchi & Saatchi and Coca-Cola.

Eager to explore the relationship between music and the mind in more detail, John continued his academic career and went on to study at the Sydney Transcendental Meditation Centre. Developing a scientific understanding of meditation and how it affects the mind, he studied an Alpha Relaxation Course with Jacob Bloom, as well as Systematic Desensitization Relaxation Techniques at the University of New South Wales and Mind Language with Robert Murphy.

Aside from his academic and professional experience, beginning to compose Alphamusic™ had a much more personal connection for John. When his father became extremely ill in 1984 with a myriad of stress-related conditions, John decided to pursue the scientifically researched benefits of Alphamusic™ further.

John’s father was a very traditional man – he was not open to meditation or anything he saw as too new-age. As much as John professed the benefits of calming the mind through meditation, his father continued to reject the idea. The more John went on to learn about Alphamusic™, the more focused he became on composing music deliberately aimed at regulating the alpha waves and calming the mind. John’s ultimate goal was to create music that could ease users into a meditative-like state, where they could reap the benefits of meditation without having to directly engage with it.

Sadly, John’s father passed away before he was able to properly benefit from the results of Alphamusic™. However, building upon brain wave research, John endeavoured to compose a series of titles that address a whole host of common ailments from insomnia to anxiety, offering an effective and non-invasive natural remedy to those suffering. John’s wealth of experience composing and producing music means that each title is complex and varied, allowing the brainwaves to slow but also keep the brain intrigued and interested.

Thanks to the boom in Alphamusic™, John has since been interviewed on BBC TV Look East, The Telegraph and Channel 9 TV Australia. His music was featured in the Diana Concert at Wembley and enjoyed by the attending Royal Family, as well as being played at both Hyde Park Calling and Live Earth concerts.

There is a simple remedy with which you can banish fatigue, insomnia, fears and even some chronic illnesses – Alphamusic™.
It is ordinary music which affects the brain activity and which the scientific community has been studying with an increasing interest to discover its usefulness in everyday life. Due to its ability to influence brainwaves, their features and functions,
music is a powerful remedy which can help improve the quality of life and health.
In the following story about his alpha music you will learn how the Australian composer and meditation teacher John Levine used the link between the brainwaves and music and how he managed to improve memory and mood, eliminate pain and fear in children and adults.

In 1924 dr. Hans Berger, a German physiologist, psychiatrist and neurologist, constructed a device known as electroencephalograph (EEG). The device was the first in history to physically register the human brain activity, later named ‘Berger’s wave’. Two basic wave types were observed in the beginning, specifically alpha (slow activity) and beta (fast activity) waves. Other frequency activities were discovered later and classified as theta and delta. The brainwaves are what underlies our emotions, thoughts and moods from a biochemical-neurological point of view.
Although it is clear that the brainwaves are a neural activity, the place where they are generated and where they communicate information in the brain is still a mystery.
We can define the brainwaves as a symultaneous energy release by a group of neurons. Their characteristics, frequency range, patterns and functional tasks can be divided into four basic groups:

Alpha (α) waves are most frequently related to states such as relaxed mindfulness, awareness, creativity, strong associativity and unfocused attention.
This type of waves is linked to cases where a subject is expected to anticipate a certain stimulus or, in the situations of calm, to the sensations of ‘floating’ or pleasure.
An alpha brain activity is an integral part of relaxation before sleep. It arises almost immediately after the person closes his eyes leading to the emptiness of mind and the state of no thoughts.
As a person’s growth is accompanied by the growth of his alpha strength, a process linked to an individual’s maturation. There is an increase in the cognitive competencies and in the focus on the specific.
In this state, the individual is on the boundary between the wakefulness and sleep, but preserves the sense of alertness.
Meditative states and the integration between mind and body take place at this moment.
Alpha brain frequences are associated with the state of deep relaxation and calm. These factors are directly related to the reduction in stress, increased concentration, creativity, intuition, perception and immunity level, as well as to the processes linked to heart rate and breathing regulation.
On the other hand, beta frequencies are characteristic of the states of increased alertness, reactions and acute senses.
In such a state, the organism is prepared to fight and flight response when survival is at stake.
Decisions are characterized by the readiness for action and self defense, accompanied by quick and explosive responses to the given situation.
Such a type of adaptation automatically puts the body under stress, which can lead to negative physical and mental consequences in the long term.
Due to the accelerated pace of life, people experience more and more beta waves in their everyday life, which leads to a host of other problems. The quality of life decreases, acute stress and cardiovascular ailments appear, and the social skills deteriorate. 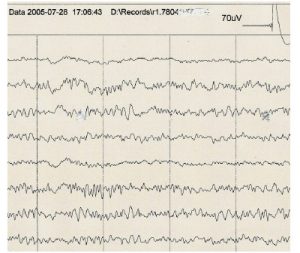 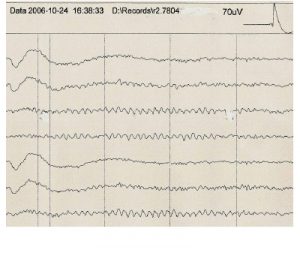 John Levine is an Australian composer, piano player, meditation teacher and the author of numerous musical works designed to stimulate the alpha brainwaves.

His music is a medium with the strongest synchronizing potential.

This type of stimulation is an excellent technique of entering a determined frequency state.

In this state, there are feelings of calm, creativity and a higher control over life situations and behaviour. The mood is improved, thinking becomes more focused and self-respect is increased. The state of self-healing is enhanced too. It has been discovered that creative individuals spend most of the time in alpha and theta states. The athletes subjected to alpha stimulation achieved better results and performance. John Levine’s Alphamusic™ is finding its place in numerous kindergartens, elementary and high schools, universities and hospitals. It is used for the purpose of improving the learning process, productivity and creativity and inducing relaxation. In 2003. Levine introduced Alpha music to more than 30 Australian kindergartens and child care centers. Soon afterwards he spread his practice to numerous hospitals and dental clinics which recognized a positive influence of background alpha music on their patients. Children in schools reported calm, energy, sublimeness, heightened associativity and synchronization of mind and body. John Levine’s Alphamusic™ succeeded in ensuring alertness in pupils as well as a higher degree of knowledge absorption. It stimulated their imagination and emotions. They observed, they were more focused, active, productive and adaptable to new conditions. Children and parents were found to have an improved memory, a stronger sense of cooperation and a generally more relaxed mood. At the same time, the frequency of violence and disagreements was reduced. In the physical sense, many subjects noticed alpha music alleviated their headaches, hyperactivity and feelings of panic.

John Levine’s music strengthens immunity (reduces cortisol and increases melatonin), balances breathing and heart rate, relieves stress and stimulates self healing. Alpha waves have been found to induce a state of deep relaxation and inner peace, an increased decision-making ability and an enhanced short-term memory. They improve attention, imagination, concentration, creativity, intuition and perception.
Symptoms for which they appear to be beneficial include:

Dr. Iwona Olszewska i dr. Maciej Žarow published a study on the effects of background alpha music on patients in a dentist’s waiting room. The patients reported they had observed the reduction of stress, anxiety, phobia and pain due to music.
The study showed this type of stimulation helps equally well with schizophrenia, muscle cramps, Parkinson’s disease, ADHD and chronic back pain.

Dr. Rob Bridgman authored an equally interesting paper in 2005. He studied the effects of alpha music on the behaviour and scholastic results of adolescents with behavioural problems. By observing a group of ten children aged 12 and 13 with behavioural and emotional difficulties Bridgman noticed many benefits of Levine’s music. The children achieved better test results and recorded a decrease in impulsivity, hyperactivity (by 46%) and talking in class (by 87%). Their overall academic success improved by 108,1%! The author also noticed an improved concentration, higher level of focus, greater drive and productivity.

All the studies conducted so far have confirmed the health benefits of John Levine’s alpha music. Experts recommend its use not just to raise the quality of work, enhance memory, focus and calm, but also to strengthen immunity and aid recovery.